Build Rapport and your success – NLP

Build Rapport and your success – NLP 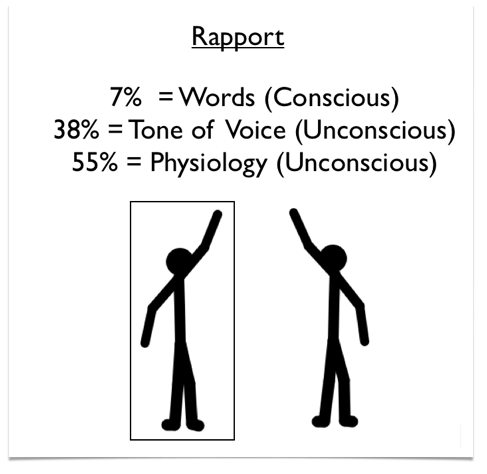 One of the major things that master communicators all have in common is the ability to get into rapport with their audience. Whether you are communicating on a one to one basis or if you are communicating to a group. Whether it be in education, business or therapy, rapport is a very important process.  In Hypnosis rapport is the state where the person being hypnotised accepts what the hypnotist says uncritically at an unconscious level, accepts the suggestions that are given uncritically.

NLP considers rapport as a process.  In fact rapport was not really talked about much before NLP.  NLP looks at providing a process to enable you to consistently get into that state for energetic connectedness with someone.

As it does with most things, NLP looks at building rapport as a process. What process do you need to go through to get in rapport with someone?  How do you get into that state where your suggestion is accepted uncritically by the people to whom you are communicating?  That sounds like an almost magical state doesn’t it?  Where the subject really listens to you uncritically.

The question is how do you begin to be able to consciously get in rapport with someone at the unconscious level?  How do you consciously establish communication with the clients unconscious mind?  That is the key for rapport.

Usually when you are getting to know someone you will both search for subjects to talk about where you have something in common, whether it is the football team that you support, where you live, where you go on holiday, your cars, something that you both have in common, where you feel that the conversation will be easy.   This is consciously seeking common ground.

In NLP rapport is more like unconsciously seeking common ground.  Its when, for example you match and mirror someone then you are doing it out of their awareness in order to establish that common ground. Where the unconscious mind can look across at you and say, “ah yes, that person is just like me.”