How to win a penalty shootout

How to win a penalty shootout

As an England and Sheffield United football supporter I have suffered greatly over the years from temporary emotional distress caused by penalty shootout losses!  They always provide great drama, and for the victors great joy, but what a terrible wrench it is to see your team sitting near the centre circle with heads in hands, tears rolling down faces as the players rue their penalty misses. The thing is that you can tell which players are likely to score and which player are going to miss before they even step up to take the penalties, can’t you?

I mean, it is not really that difficult, is it? They are professional footballers, so they should be able to pick a spot in the net to aim at and kick the ball with sufficient pace to make sure that the keeper does not get there, shouldn’t they?  In training they will score from the penalty spot 99 times out of 100. So what is so different about doing the same thing in a penalty shootout?  “It is the pressure” I hear you say.  And, yes it is the pressure of the situation that changes things but what is it specifically that changes? Why does it change and how do you combat this to take a successful penalty time after time? 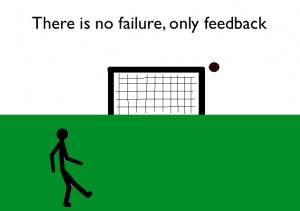 In a training session, a player approaches the ball and what do you think is going through their mind as they step up to take the penalty?  They are probably picking a spot in the net to aim at, they are judging how hard to hit the ball, and they are maybe rehearsing how they are going to kick the ball in order to score.  They are maybe also imagining the ball hitting the back of the net. Are they worrying about missing? Are they worrying about whether the goalkeeper is going to save it? No, they are not.

In a penalty shootout, when we see a player approach the ball, sometimes we can sense that the player would rather be anywhere else on earth, doing anything else other than where they are at that moment, taking that penalty. What is going through their mind do you think? “Oh I can’t wait until I have scored, pleeease let me score, pleeeease do not let me be the one to miss.”

I watched with horror recently as a player from my team turned his back to the ball and to the goal, then he spun around and inevitably blasted the ball wide.  What was going on there?  What was going on in his head for him to turn his back on the ball?  Was he using wishful thinking?  I think that he was. “I really hope that I am going to score here, just don’t think about it, turn your back on it and you can ignore the situation until you absolutely have to kick the ball.”  What happened to picking your spot and imagining the ball hit the back of the net?  You can’t pick your spot if you are looking into the stands can you?

So, basically my emotional distress and the future of my football team was determined by this players wishful thinking. Great!  Does he get paid for wishful thinking?  I want his job!

I also recall famous England penalty failures, the player walking up to the penalty area from the centre circle, eyes glazed over, face going white.  His thoughts at that moment? “Oh, take me away from here! I just want this moment to be over.”  And it was, over that is, as his ball cannoned off the crossbar.

Then you have the cool Italian, who walks up casually from the centre circle, his face relaxed, concentration in his eyes, but no fear. You can sense that he is loving the attention, he knows that he is going to score. Failure is not in his mind, he picks his spot and imagines exactly what the ball is going to do.  Then he steps up and casually dinks the ball over the keeper and it loops into the net. Easy as that!

The difference.  The Italian was absolutely in the moment. He was loving that moment in time and embracing it. The England player, he was wishing he was elsewhere, he was dreading missing. In his mind he was in the future and he was not in the moment at all.

That is what it comes down to, how much do you “want this moment?”

Can “wanting this moment” be trained? Yes, absolutely it can be, it is merely programming thought processes and this is one of the arts of Neuro-Linguistic Programming.

Anthony Beardsell provides performance coaching programmes which incorporate these skills and you can also train in NLP with Excellence Assured online at our NLP e-Learning centre.