Coaching – Keep your values out of it!

One of the key attributes of a successful coach is their ability to discuss someone else’s circumstances without offering any sort of opinion, without giving them advice and without imposing their own model of the world. Given that we habitually do involve our own opinions, our own model of the world in conversations unconsciously and without being aware of it, this can be easier said than done.

For example, Bill is having a conversation with his friend Adam.

Bill says “Really! Why are you thinking of doing that?”

Now, what Bill says could possibly be interpreted in two ways.  He could be really interested and thinking “That’s fascinating, I’m curious to know more about your decision.” or he could be thinking “Really!!! Are you mad?! I would never even consider doing that, you must be crazy, you’ll die!”    The chances are that based on your own values, beliefs and opinions, and the way that I have written it, you probably think that Bill’s comment could be interpreted as the latter and therein lies the problem if you apply it to a coaching context.

We know that our brain is just a big filtering system. It filters our experiences in order to ensure that the information levels that we take in are manageable for us. If you have ever felt confused, then you will understand how useful it is that your brain normally does filter information for you, since confusion amounts simply to information overload. There are several ways that the brain performs this filtering, it deletes information, it distorts information, and it generalises information in an effort to make life easier for us. 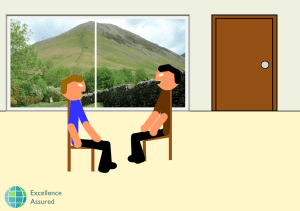 Some of the filtering that takes place involves filtering of information, filtering of our experiences based on our past experiences, memories, the values that we have established, and our beliefs. This is why we can experience the same event, and we each have a different recollection of it. We each apply our model of the world to the events that we experience, and it is our model of the world once applied that will determine our actions, and our memories of that event.

Of course it is entirely possible that Bill did not consciously intend to be confrontational, the trouble is that this filtering is an unconscious process and often we speak before we think.

Another example. Sue is being coached by Mark.  Mark comments to Sue that his boss “seems to be deliberately ignoring me this week, she has had her office door closed nearly all week.  I must have done something to upset her.”

Now, it could be that Mark’s boss has been ignoring him because he has upset her. The chances are that this is not the case, but we cannot be sure. Mark has imposed his model of the world and he has drawn his own conclusion to his bosses actions.  Sue realises that this way of thinking is not empowering for Mark, and she realises that there may be an alternative explanation to Mark’s bosses actions, and so she decides to challenge his conclusion.

In her questioning, Sue has to be careful to leave out her own model of the world.  It is possible that she thinks that Mark’s boss is just really busy and that is why she has had her door shut, but Sue cannot let her own conclusions influence her questioning.  If Sue were to ask, “is it possible that your boss had her door shut because she has been really busy?” Then this would be imposing her model of the world on Mark, and this is what she needs to avoid.

Sue identifies that there are two different parts of Mark’s sentence that can be challenged. “Seems to be deliberately ignoring me” and “I must have done something to upset her.”

She decides to get Mark to challenge his thinking by saying, “I’m curious to know more about this, please could you explain to me how you have drawn this conclusion?”  This line of question then enables Mark to explore his conclusion in more detail, and he may just find that there are other possible conclusions that he could draw at the same time.  And that is the value of coaching!

As a coach it pays to be aware of when you are applying your own values, your own model of the world to your thinking. Leave your values at the door and practice the art of self sacrifice in your coaching sessions.