How to stop the urge

How to stop the urge

I’m always thinking of ways to help people live better, more empowering lives and I want to share with you a mental technique that I have developed to help you to stop those pesky urges that you get to do things that are not good for you.

You know what I mean by the urge don’t you? It is that thing that happens inside you that means that you just have to do something.

What the urge is all about

I used to smoke and this technique will work for stopping smoking, overeating, any bad habit. Before I had a cigarette I used to get an urge to smoke, I would have an urge to go and pick up a cigarette. For me the urge came in the form of a feeling that I got. I got a feeling that something was missing. The feeling was then followed quickly by a mental image of me having a cigarette, enjoying it.  I then associated the mental image of me having a cigarette with the feeling of being satisfied. This of course led to me having a cigarette in order to get over the feeling of missing something and in order to feel satisfied. It was the urge that set off, or triggered the behaviour that was not good for me. 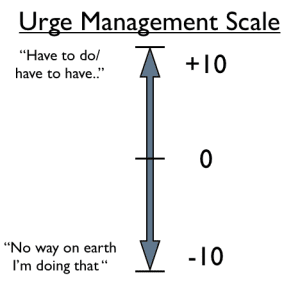 You will go ahead and do something generally when you think that the thing that you are going to do will bring you pleasure. Satisfying an urge, if you think about it, is likely to give you some kind of pleasure although it will only be very short lived. If you have an itch and you scratch it, you will soon have another itch to scratch.

You will normally avoid doing anything that you think will bring you pain. Physical pain and mental pain. You will not put your hand over a burning candle for obvious reasons, you will not go for a run if you think that do it will be painful for you. You will put off the washing up if you have associated negative mental images and negative feelings with the process of washing up. You will put it off until the pain associated with leaving the washing up on the side is stronger than the pain of actually doing it.

You know logically that eating some chocolate will not do you any good, and in fact overeating chocolate in general is causing you to feel uncomfortable in your life, however logic goes out of the window when feelings are involved!  You are doing something in your head that is creating this feeling that you just have to eat the chocolate.

The key to stopping the urge is to discover what it is that you are doing in your head when you get the urge.

Example – Stopping the urge for chocolate

I used this technique with someone recently who was overeating chocolate, so in order for you to understand how to apply the technique to your own urges, I’ll tell you what we did.

The first thing that I had Sally do was to picture a bar of chocolate. Imagine that she could see a vivid picture of a bar of chocolate in her mind. Once she was doing that I asked her to imagine her desire for the chocolate on a scale of -10 to +10. Plus ten on the scale being “Get out of my way, I really have to have that chocolate now!” Minus ten on the scale being “I think that I am going to be sick, I couldn’t even think of holding chocolate let alone eating it.”

I asked her whereabouts on that she was. She said about plus four. So, she was obviously quite interested in eating the chocolate and it held some desire for her.

At this stage I could almost see Sally drooling at the mouth. She told me that her mouth was watering.  Quickly I asked her what she would need to do to make the picture in her head less desirable to her, so that it was a zero on the scale. Zero being no real desire to eat it or avoid eating it. She said that she would need to move the picture away from her, so that she was imagining it on the table rather than holding it. I asked her to mentally do that with the picture she had.

I then asked her what she would need to do to make it a minus five. She said that she really couldn’t imagine ever thinking of chocolate in terms of a minus five in desire. I said “I know you can’t but if you could, what would you need to do?” She thought about it and then said, “I would need to add some tuna to the ingredients of the chocolate bar.”  I told her to imagine that her bar of chocolate was made of a mixture of chocolate and tuna. At this stage I could see her pulling a face that let me know that she had followed my instruction!

Finally, I asked her what would she need to do to take her desire for the chocolate to a minus ten? She said that she would need to feel that eating it would give her a heart attack. She would need to imagine the consequences of having a heart attack as a result of eating the chocolate bar. This was enough to turn her pale, so I knew that she was picturing this in her head.

At this stage the exercise was over, so I got her to take a sip of her water and rid herself of that image for now.

We then reflected on the exercise. She confirmed that the thought of eating chocolate now was repulsive to her. She knew now what she had to do in her head in order to change her level of desire for chocolate from average, to have to have, to a minus ten.  She had the tools therefore to stop her scratching that particular itch. She could stop that urge in its tracks.

This exercise is using an NLP technique called Submodalities. You can learn all about submodalities and how to use them in our online NLP Training courses.