It is never too late

It is never too late

It is never too late to start reaching for your potential – now we have the evidence!

You know, if you want to change the results that you are getting in life, then you have been given all the tools to enable you to do that. We just need to get smart about understanding the tools that we have and how to use them in pursuit of our goals.

Fields of neuroscience and genetics have developed rapidly over recent years. Until quite recently it was thought that neurons, only existed in the brain, it is now recognised that they exist throughout the entire nervous system. Also until around the 1970s, an accepted idea across neuroscience was that the nervous system was essentially fixed throughout adulthood, both in terms of brain functions, as well as the idea that it was impossible for new neurons to develop after birth.

A relatively new concept in neuroscience has emerged called neuroplasticity. Neuroplasticity or brain plasticity refers to the now acknowledged characteristics of the brain and nervous system being moldable and changeable in structure, changing throughout life in response to changes in behaviour, environmental changes and thought processes. Neuroplasticity has replaced the formerly-held position that the brain is by nature a static organ, and explores how – and in which ways – the brain changes throughout life.

Studies have shown that new neurons can be developed in each one of us throughout life and even into old age. As well as making huge differences to the way that we can treat and aid recovery in people with brain damage, all this really does open up a whole new field of possibility for us. 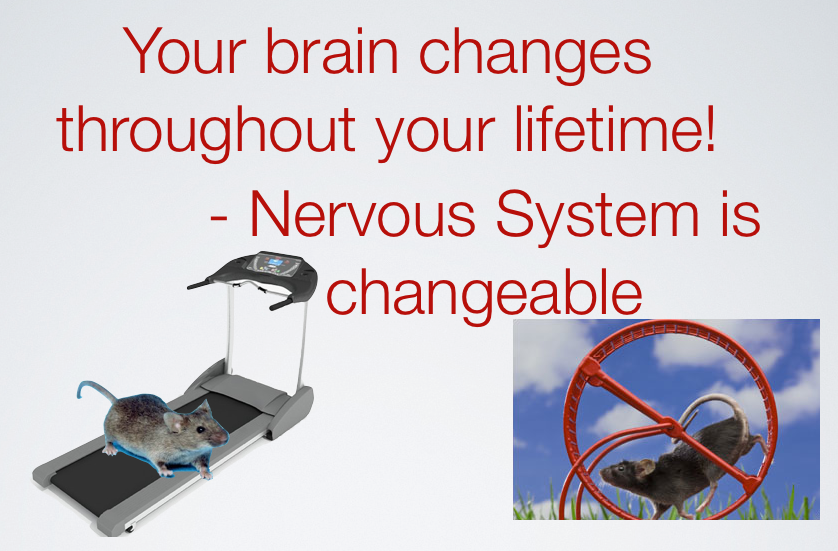 In a 2009 study, scientists made two groups of mice swim a water maze, and then in a separate trial subjected them to an unpleasant stimulus to see how quickly they would learn to move away from it. Then, over the next four weeks they allowed one group of mice to run inside their rodent wheels, an activity most mice enjoy, while they forced the other group to work harder on minitreadmills at a speed and duration controlled by the scientists. They then tested both groups again to track their learning skills and memory. Both groups of mice improved their performances in the water maze from the earlier trial. But only the extra-worked treadmill runners were better in the avoidance task, a skill that, according to neuroscientists, demands a more complicated cognitive response.

The mice who were forced to run on the treadmills showed evidence of molecular changes in several portions of their brains when viewed under a microscope, while the voluntary wheel-runners had changes in only one area. Chauying J. Jen, a professor of physiology and an author of the study, said. “Our results support the notion that different forms of exercise induce neuroplasticity changes in different brain regions,”

As Oliver Wendell Holmes said “A mind that is stretched to a new idea never returns to its original dimension.”

Our NLP courses are packed with new ideas that will definitely stretch your mind and will change your thinking.

We would love for you to join us on an NLP Training Course.

Our NLP Training courses are still offered to you at a tremendously discounted promotional rate online.

Join us on a course today. NLP Training Online