The NLP swish pattern is one of my favourite NLP interventions and it works brilliantly. You can use the swish pattern for any time that you get in a state of mind that you are not happy with, or for any behaviour that you wish that you didn’t have.

It works with minor unwanted behaviours and sometimes minor addictions although Timeline techniques may work better in some cases.

I used the NLP swish pattern recently with a client who wished to quit smoking and it worked really well for her.

Here is how we did it.

First of all, it is important that we get the trigger for the unwanted behaviour. By trigger, I mean the thing that sets the behaviour off. 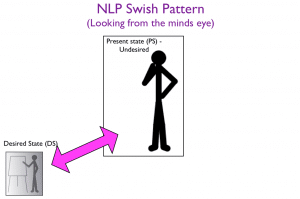 I kept asking what she did before that until we discovered that in fact she got a picture of relaxing and having a cigarette.  It was this picture that set off a chain of events that led to her getting the cigarette out of the packet and lighting up. The chain of events included getting a certain taste in her mouth, and getting the feeling of needing a cigarette, but it was the initial picture that set the process off.

This is what we want, we want a picture that the client gets, and that we can delete from their imagination and replace with a more empowering picture for them.

If she had said that the feeling came first, and that was the trigger, I would have asked her if she had a picture associated with that feeling. So, you can do that if you get a feeling or a sound as the trigger.

I then asked her if she had a picture in mind of something empowering for her that she would rather have instead, and that would encourage her not to smoke.  She said that she had a picture of her holding her grandchildren in older age, and she was in really good health.

NB It is important that the picture that is going to replace the current picture is dissociated i.e. they see themselves in the picture.  This makes the picture more compelling to them.

I then said that when I gave her instruction she should swap the pictures over making the new picture big and bright and right in front of her whilst shrinking the old picture down to her left.

Her instruction would be when I said “Swwwiiiiiiish. ” Whilst saying “swish” I would move my hand from the bottom left corner of her vision to the front of her vision, thereby encouraging her to do the picture swap in her mind’s eye.

“Swwwiiiiiiish. ” I said and moved my hand up.

After a short break of a few seconds I asked her to get the pictures back up on her screen (mind’s eye).  We replaced the pictures to their original positions and we repeated the process.

We repeated the process about 30 times! She could no longer get her old picture back, and she had quit smoking. It took about ten minutes!