Hammer candlesticks, Shooting Star candlesticks and Inverted Hammers are all important  signal candles to look out for on your charts.

Hammer candlesticks appear at bottoms of swings. They look like hammers with the head of the hammer, or body of the candle at the top and a big long wick or tail as the handle.

The way to identify a Hammer is to ask the question “Is this candle lower than previous candles in the swing? Is the tail at the bottom at least three times longer than the body?” It the answers are “yes” then it is a Hammer. You swing a hammer downwards, therefore they are at the bottom of swings.

Hammers can either have green or red bodies. If it is at the bottom and it has a green body then it is slightly more bullish than if it has a red body. Either way it has a long tail indicating that bears failed in their attempt to take the market lower during this period. Bulls fought back and ended by winning back some ground. A Hammer is confirmed when the next candle is bullish, confirming that the bulls now have strength and are taking control. 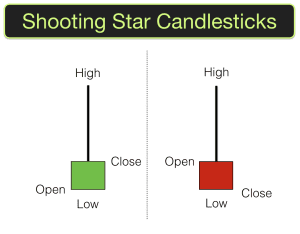 These candles appear at tops of swings. They are basically the opposite of a Hammer and they look like shooting stars with the star or body of the candle at the bottom and a long tail as the star blazes across the sky leaving a trail behind it (above it on our charts).

The way to identify a Shooting Star is to ask the question “Is this candle higher than previous candles in the swing? Is the tail at the top at least three times longer than the body?” It the answers are “yes” then it is a Shooting Star. You will see a shooting star in the sky, therefore they are at the top of swings.

Just like Hammers, Shooting Stars can either have green or red bodies. If it is at the top and it has a red body then it is slightly more bearish than if it has a green body. Either way it has a long tail indicating that bulls failed in their efforts to take the market higher during this period. Bears fought back and ended by winning back some ground. A Shooting Star is confirmed when the next candle descends and is bearish, confirming that the bears are now taking control.

The hammer head is the body of the candle and is at the bottom. The handle is above it pointing upwards.

These candles can have either red or green bodies. The tail forms at least 75% of the total length of the candle. Price action during this period indicates that bulls have been in a real battle for power with the bears. For a good portion of the candle bulls have been stronger, forcing price upwards, however they have eventually been repelled by the bears. Price has finished near the open of the period and the close of the previous period. This indicates that the bears may be losing control. A bullish fightback may be on the way.

I find this candle less convincing than the others that I mention here and you should definitely seek confirmation of price breaking the high of this hammer before assuming that price has finished with its downward momentum. Having said that, they are seen quite frequently at bottoms and therefore I consider them to be a useful candle to watch out for.

Learn to trade the full range of candlestick patterns within a structured trading plan for profitable trading – join us on our online trading course.