Daily trading setups and analysis on the UK FTSE 100 Index

The FTSE spent the morning idling along underneath the trendline for the downtrend that we have been in for the last few days and as illustrated this morning on the 30 minute chart.

Just as we approached mid-day and the market dipped we got a Pin Bar and that signalled a resurgence for the market.

At 1.30 we have the US non-farms news which produced a breakout above the trendline. As with most news events price retraced back to the pre announcement level before shooting off upwards in the direction of the prior breakout. Several Pin Bars showed us exactly what the sentiment was amongst market participants and we got our trade long right up to the resistance level of 6740. Again we had two Pin Bars pointing towards an exit for our trade and a retrace of some of our upward momentum.

Today was another Pin Bar day on the FTSE!

Nothing is ever completely clear in trading. We live and operate in a constant fog. However, things are a little clearer on the 30 minute chart above this morning. We are in a downtrend. You can see the trend line running across the tops of the peaks.

Prices are currently being supported by the 6700 level. This is a major support and resistance level, so I shall be watching on the open today to see whether this level continues to offer support or drops below it and starts operating as resistance.

Yesterdays close is at 6752 and this would be a good target for any upward momentum from the FTSE today. Other than that in terms of support levels we are looking at the round numbers, 6700, 6650 and also 6640 which has been a big support level in the past.

When the market is trending it is an amateurs game to wait for reversals. Sometimes we could wait all day for a reversal and none appear. Bounces short from the downtrend lines have a much better prospect. However we need to stay alert to higher lows and higher highs which may signal an end to the trend.

Finally, there is the US Non-farms payroll monthly “news event” this afternoon at 1.30pm so that may shake things up a bit. I’ll be making sure that I am out of the market at that time as they can be severely disrupted by these announcements.

As it turned out it was another trading range day on the FTSE. However for most of the day it didn’t look like it was going to work out like that as we did have a big sell off.

The first bar of the day often gives aclue as to what kind of trading day we are in for. Today the opening bar was a large Doji. Dojis are mini trading ranges and on this occasion it proved to be an accurate guide.

At the open the market was flirting with the close of yesterday and our downsloping trendline as drawn on the chart this morning. We got a number of Pin Bars in the opening half an hour that indicated that the market was telling us “I’m going down!”

What then followed was a perfect mini bear trend. We had a breakout. A huge bear bar. This took us to the bottom of the recent trading range at 6740.

Price then pulled back to test the breakout. It didn’t make the high of the breakout bar (that’s the test). Price met the 20 EMA, produced an inside bar and then we got a bearish engulfing candle. Price dropped lower.

We had seven consecutive bear bars. Then a number of bullish Pin Bars started appearing. This was an indication that the market was not happy at this stage to go any lower.

A huge bullish engulfing candle appeared, this was the breakout from the two hour trading range. The market pulled back to the EMA, where we got an inside bar (like this morning but in reverse). We finished the day at the important 6740 level and right on the verge of piercing the longer term bear trendline.

The FTSE has maintained its downward path overnight and is currently sitting just below yesterdays close. There will probably be a small gap when the market opens which may or may not be tradable depending on what happens over the next half an hour.  Too small a gap and the trade doesn’t offer a good enough traders equation.

On the chart the market looks poised on the top of a support level – 6770. It is only minor support though so it may crash through that area if it turns even more bearish at the open.

I consider the current move a down leg in a trading range rather than a sustained trend. The market is still putting in big up and down swings. Both bulls and bears are making money in this market.

A trend can start at any time but I think that the odds favour further trading range action today.

Key levels to watch today in addition to the round numbers are yesterdays close around 6775, 6822, the sloping resistance line from the long price squeeze as pictured below (currently at 6835). Also 6740 is a key low of the trading range. If we drop below that level then we could see a big sell-off! 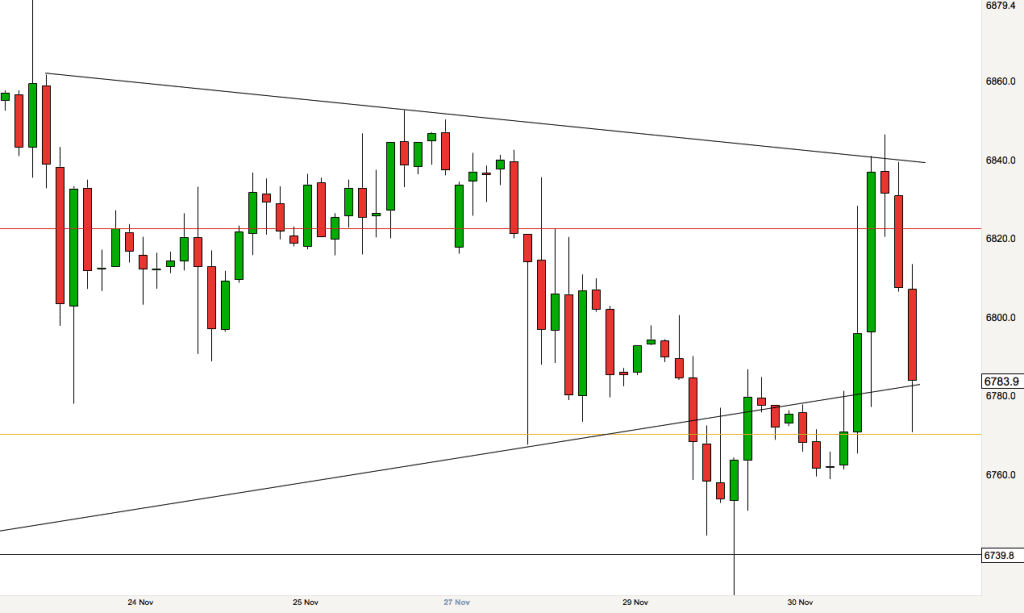 The 2 hour chart above shows another definite squeeze going on with the FTSE at the moment. You can see that the market turned at exactly the level of the upper channel line today and went right back down to the bottom channel line, offering a great trade for those who spotted it.

Markets are constantly forming these channels when they are in long term trading ranges like our market is in at the moment. I draw channels all the time. Sometimes they prove to influence prices and other times they don’t. The benefit of plotting them is when you get a good trading signal (like a reversal) and it coincides with one of the channel lines it gives you more confidence that the trade will be successful.

Below we see todays action in more detail and with the same channel lines plotted.

After visiting yesterdays close on the open today the market shot upwards. It went straight up to our key level of 6822 (red line on the chart). At the key level we got a Pin Bar – reversal bar and the market descended right down to our lower channel line.

The market ended the day pretty much where it started, down on the bottom channel line.

It is worth a look on a higher timeframe occasionally in order to get the bigger picture on what is currently happening in the market. We have been mentioning a price squeeze over recent weeks and you can see it in the chart above. This is the FTSE 100 on a daily timeframe. Each candlestick is a day of price action.

We are currently poised on the edge of the squeeze with our “legs” poking out of the bottom. It looks like the market wants to go lower, doesn’t it?

In actual fact it doesn’t really matter what the market does on a longer timeframe. As a day trader all I am bothered about is what it does next, what it does this morning. Even in the most severe long term bear markets the morning trading can be bullish, and I can make money trading long, so this is my focus.

The most recent completed candlestick on the chart was a Doji. Indecision. It has a long pin at the bottom of the candle, showing some rejection at breaking through the lower squeeze barrier.

Key support and resistance levels today are yesterdays close at 6770, 6822 and the round numbers of 6800, 6750, 6700, 6850. Additionally zooming into the 30 minute chart below you can see that the market is making a possible bear channel so I shall be watching what happens on the open as we are currently at the channel high.