Week 2 of automated day trading on a self-designed system

You can see in the chart above that since the first week of trading with my automated day trading system the system has performed well. We have had 10 green days out of a total of 16 trading days.  You will also note that the green days tend to be considerably bigger than the red days,  indicating that the system has had a profitable period.

Since I have been testing variations of this system for a while now I know that it should be very profitable over a period of time as long as the software that the system runs on in the live environment works properly and my broker (IG in this case) allows the system to operate without too much slippage. During the first week of trading with this system in the live environment I was paying particular attention to these aspects and largely I was happy with them.

Since my first week of trading on the DAX 1 minute timeframe with my self designed automated system I have had a short break. During this time I worked on a couple of aspects of the system that I was not particularly comfortable with during that first week. Particularly I wanted to look at slightly reducing the number of trades that the system takes (without adversely affecting the performance) to improve the average gain per trade and reduce the impact of charges. One of the key aspects to the system for me is that it does take plenty of trades – this is the best way to grow a trading account with limited risk to capital. However fewer trades with a profitable system can in theory mean that the overall gain is lower as the system has fewer opportunities to win It is a fine balancing act, as is everything in trading.

The major change to the trading system therefore is that it now limits itself to a maximum of one single open position at a time. This means that each trade has the same risk and reward ratio in monetary terms, and I am comfortable with that.

As a result of the changes I have made the system will take roughly a third as many trades as it was doing previously and will have a maximum gain per day of roughly 80 points, a maximum loss per day of roughly 35 points. To ensure that it provides comparable results to my first week of trading with this system I have increased my position size per trade.

I anticipate continuing to make slight changes to the system as times goes on and will make weekly reviews of the variables in the system such as stop distances and profit targets to take account of changing market conditions and volatility.

Having made the changes I am looking forward to my second week of live trading with my automated day trading system. 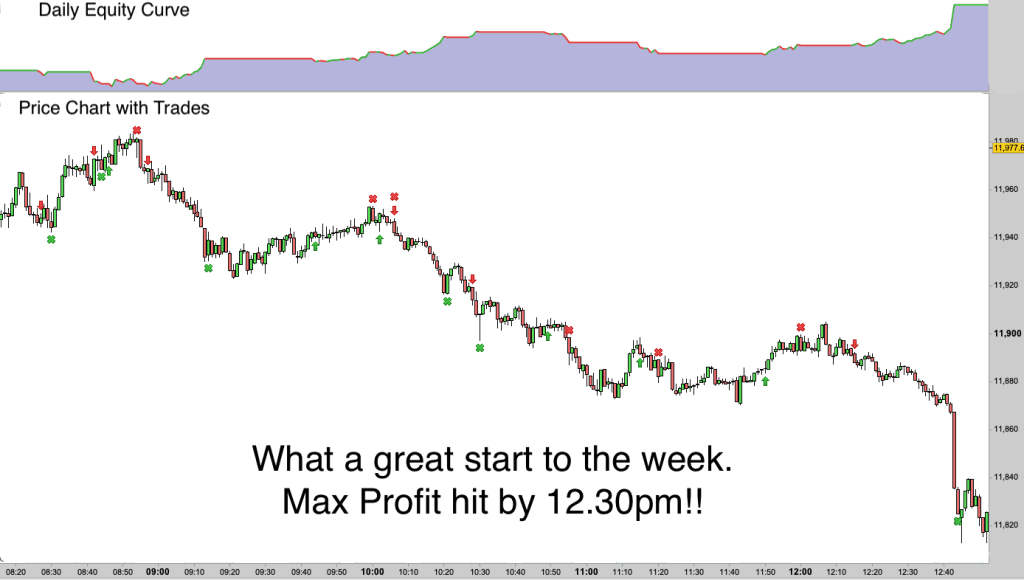 What a fantastic start to the week!  We hit max profit and ended the day up 85+ points today. We were all done with feet up (for my benefit not the system – it never tires!) by 12.30pm.

In the above chart of the DAX on the one minute timeframe you can see the trade entries (arrows), both long and short entries and the exits which are indicated by “x”.

The final trade of the day which was entered short just after 12pm made 50 points on its own. You can see the big plunge down that the market made at 12.40pm. I was watching at that time and it was a great feeling to see the money stacking up!

After today I have already made back the small losses from the first week and now have a profit cushion to build on for the remainder of this week.

Incidentally I am also running a test version on a demo account alongside this live system so that I can compare entries and exits in the demo and live environment. The test system has no profit cut off and traded all day long today. The afternoon trading conditions were completely different and the demo system lost money in the afternoon and ended the day about breakeven. That shows the value of having a maximum profit cut-off point! :) 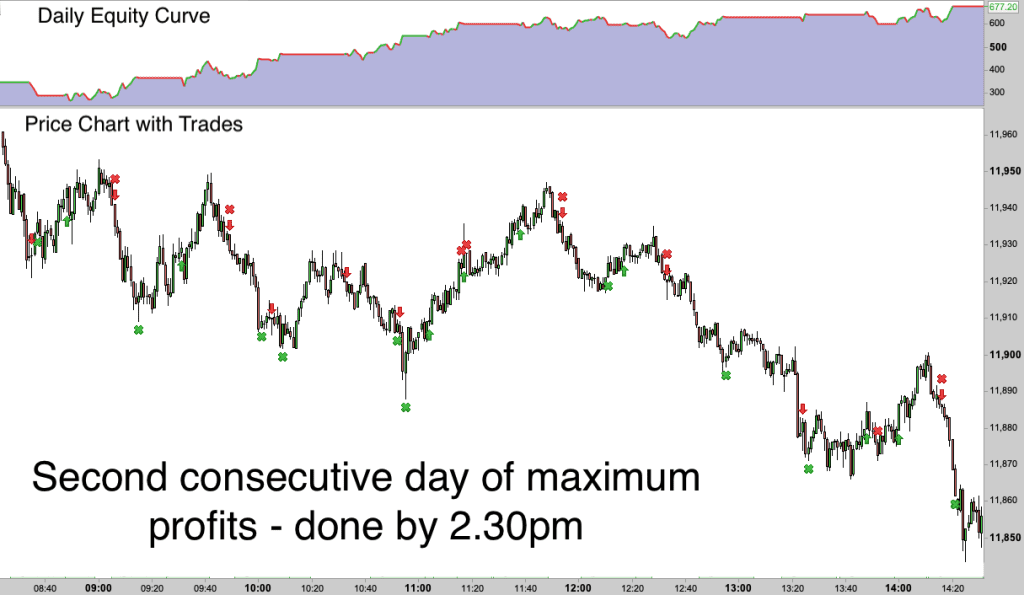 A second consecutive day of maximum profit. Today my system made 82 points and so that creates a nice buffer of profits for the week. The system is currently working at a win rate of 60%, which is better than average.

The market conditions of the last two mornings have suited this system, the DAX has been making steady progress lower with occasional big bearish breakouts and medium to high volatility.

You can see from the above chart that trades in both directions have worked out as the swings upward and downward have been fairly long and consistent although it is the short trades in this bear market that have produced the vast majority of the profits.

It was a tale of three different trading sessions today. The morning session was hugely positive and the system was potentially one trade away from max profit cut-off by 9.30am. However it then went through a small drawdown period over lunch and we entered the US trading session at 2.30pm at breakeven for the day.  A good afternoon session ensured that we finished the day in profit. Overall we finished up 54 points and that gives us an overall profit position for the week of 223 points.

The key is to start with a low position size and then gradually increase it as the system makes profits. 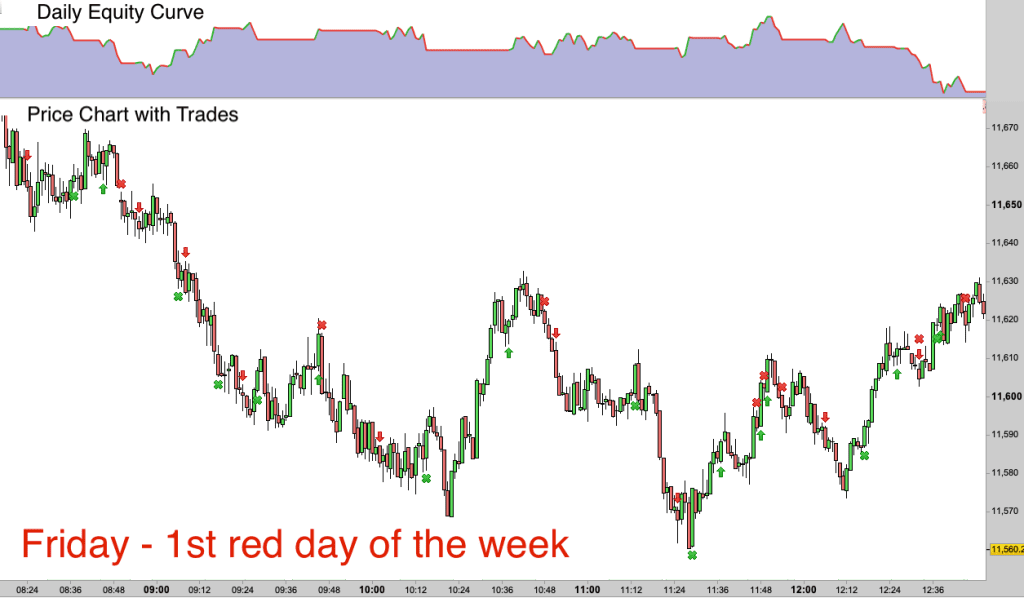 My system hit max-loss today and lost 43 points. At this level it shut down for the day at around 12.30pm. Any losing day is disappointing in trading but traders learn to take the rough with the smooth. Overall it leaves me up 180 points on where I was at the start of the week – a good week of trading.

You will notice that my max-loss today at 43 points is roughly half of the best day of profits this week, which was Tuesday where the system made just over 85 points. This is exactly how I designed the system to work.

All traders, no matter how experienced they are will have losing days and losing periods. The thing that separates the best traders from the rest (apart from possibly superior knowledge) is that their winning days and winning periods are larger than their losing days. Their winning trades are larger than their losers. This is how they consistently take money from the market and become successful over time.

Today the market conditions did not suit my system particularly well. It is a fine line between success and failure as at first glance you will not notice much difference between todays chart and any of the charts from other days this week. There are some subtle differences though. Specifically the pullbacks were longer and this caused the system to stop out on a number of trades which would have been successful with a larger stop. If I was trading manually then I would have made allowances for this and I could have interrupted the system and changed the criteria or stopped it for the day before the losses reached the max-loss but I didn’t.

I have designed this system for the long run and all the backtesting that I have done shows me that the criteria and variables that I am currently using are the most effective ones for the market currently and over time will produce the best results. So I accept the losses today in just the same ways as I did the gains in the other days this week and we now move on to enjoy the weekend break after an extremely positive week.

Over the two week period of live trading with my algorithm I am up 130 points net.