Double Tops & Double Bottoms appear at the end of price trends. You need a trend or a sharp move prior to a double top or bottom so that you have something to trade on the way back.

Otherwise called M Tops and W Bottoms for visual reasons, these are two of the best known chart patterns.

Identifying a double top and a double bottom

The characteristics are fairly obvious, there are two price peaks or two lows at similar levels. There are however a couple of less obvious criteria that the patterns need to fulfil in order to confirm their identity:

Trading a double top or a double bottom

There are two possible entry points for trading double tops and double bottoms. One is more adventurous than the other. As always you need to work out your risk and reward for the trade set up.

Your stop for these trades should be beyond the highest of the two peaks for double tops and below the lowest of the two lows on double bottoms.

If the pullback between the tops or bottoms has been significant then waiting for price to confirm the pattern may mean losing out on a major part of the reversal move. This is on one hand the less risky entry because the pattern has been confirmed, however it may mean that the risk and reward on the trade does not work out.

In these cases you could enter a trade below the lows of the congestion area at the second top or bottom. Bear in mind that taking this entry means that the pattern has yet to be confirmed. However it does mean that you have quite a tight stop. If the pattern works out then this could be a great risk and reward trade.

Essentially you are looking for reversal points on your chart. Look back on your charts to see where the market has reversed previously. Where are the strong support and resistance levels? Has price reversed several times from the same points?

When price reaches these levels, stops and starts to pullback then you can be on alert for this type of chart pattern.

You are looking for the end to a good trend. Wait for the initial trend to be broken and then see what happens. The definition of an uptrend is higher highs and higher lows. So when the market puts up a lower high with the second top you know that something has changed. The definition of a downtrend is lower lows and lower highs. When the market puts up a higher low with the second bottom you know that the trend could be changing. 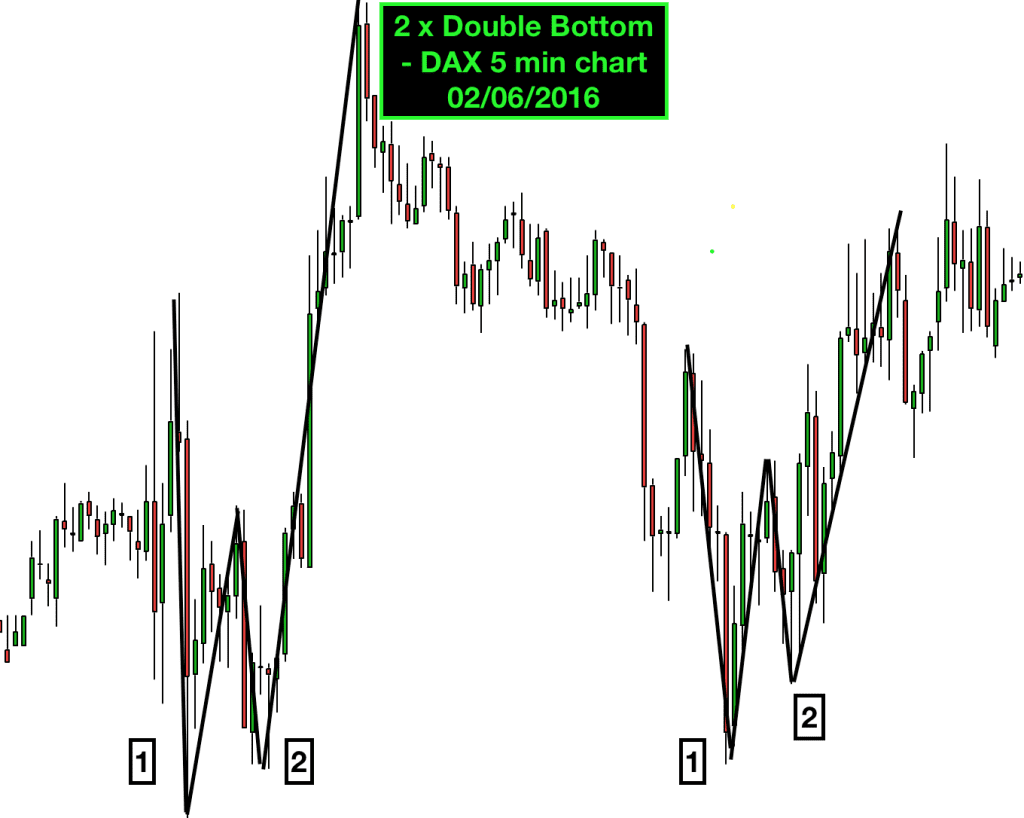 Two double bottoms in one day on the DAX index chart

Here you can see two perfect double bottoms that appeared on the DAX futures market in the same day that I wrote this article.

On both occasions the patterns completed successfully. The second lows were higher than the first lows. They both followed sharp downward moves and were succeeded by equally strong reversals. They both had “white space” between the two lows.