NLP and the 7 habits of effective people – first things first

First things first- Is it simply the best Time management tool of all time or a complete system for effective life management?

Today I have a treat for you. When I was at the peak of my corporate career around about the turn of the millennium I came across the book First Things First by Stephen Covey. It would be doing it an injustice to say anything other than it has been invaluable to me. It introduced me to the single most useful concept that I have ever put to work in my life and my career.

First things First was one of the 7 Habits in the book 7 Habits of Highly Effective People which has probably been one of the most respected business reads of our generation. The First Things First habit, which to me seemed like it was almost tagged on to the end of the 7 habits spawned an entire book of its own and became my favourite habit of all.

I think that you will love it.

One of the aspects of it that appeals to me most of all is the way that it helps put each of us as individuals in control of the direction that our life takes. It is a highly effective tool for self management or self-coaching. It helps us move toward, focus our time on and take actions on things that are important to us.

Covey suggests that we live with either an imaginary or a physical list of things to do. The things on our list are either forced on us by our work or by other people in our lives or they are things that we have decided or planned to do. They may also fall into both camps.

We either do things as they come to us during each day or we take control and decide at the start of each day, week, month which things on our lists we are going to do during the next period of time.

How do we decide which things to do?

This is the next point. Covey argues that we can decide which things on our ‘to do list’ are important, which are urgent and which are a bit of both. This is a key point. Each of the items on our list are in one of four boxes: 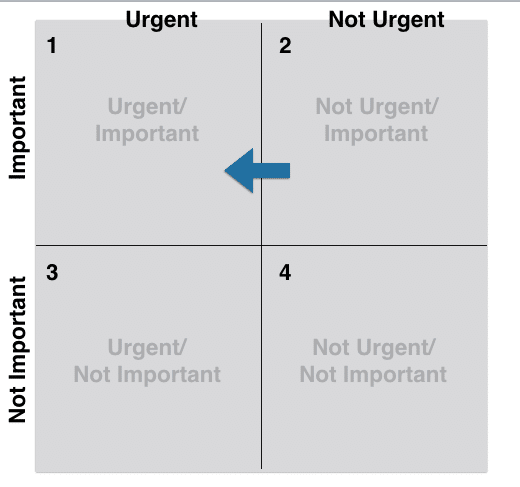 We can choose which box we spend our time operating in and it is this decision that we determine our effectiveness in managing our time, our growth and probably our future.

Two fo the key points to NLP coaching and NLP in general are that they are outcome focussed and that they put the individual in control of their destiny, or at least encourage them to take control wherever possible. We talk about an equation Cause> Effect. …..

As a minimum, this gives the individual the feeling of being in control, which is hugely beneficial.

At some stage in a coach/coachee, or even doctor/patient relationship (as used current in the UK NHS) the patient or coachee should be encouraged to take control of reaching their own conclusions/take action to reach their objectives and solve their own problems/return to health.

This is one of the key benefits to using the first things first model too. Enjoy the video.